Since 2016 when I first installed FreeDOS on my 1998-vintage laptop (yes, the same one mentioned in this article), I've been trying on-and-off to get it connected to the network. The real hangup was that I didn't understand DOS networking to begin with, and the laptop itself doesn't have any modern networking hardware on it. 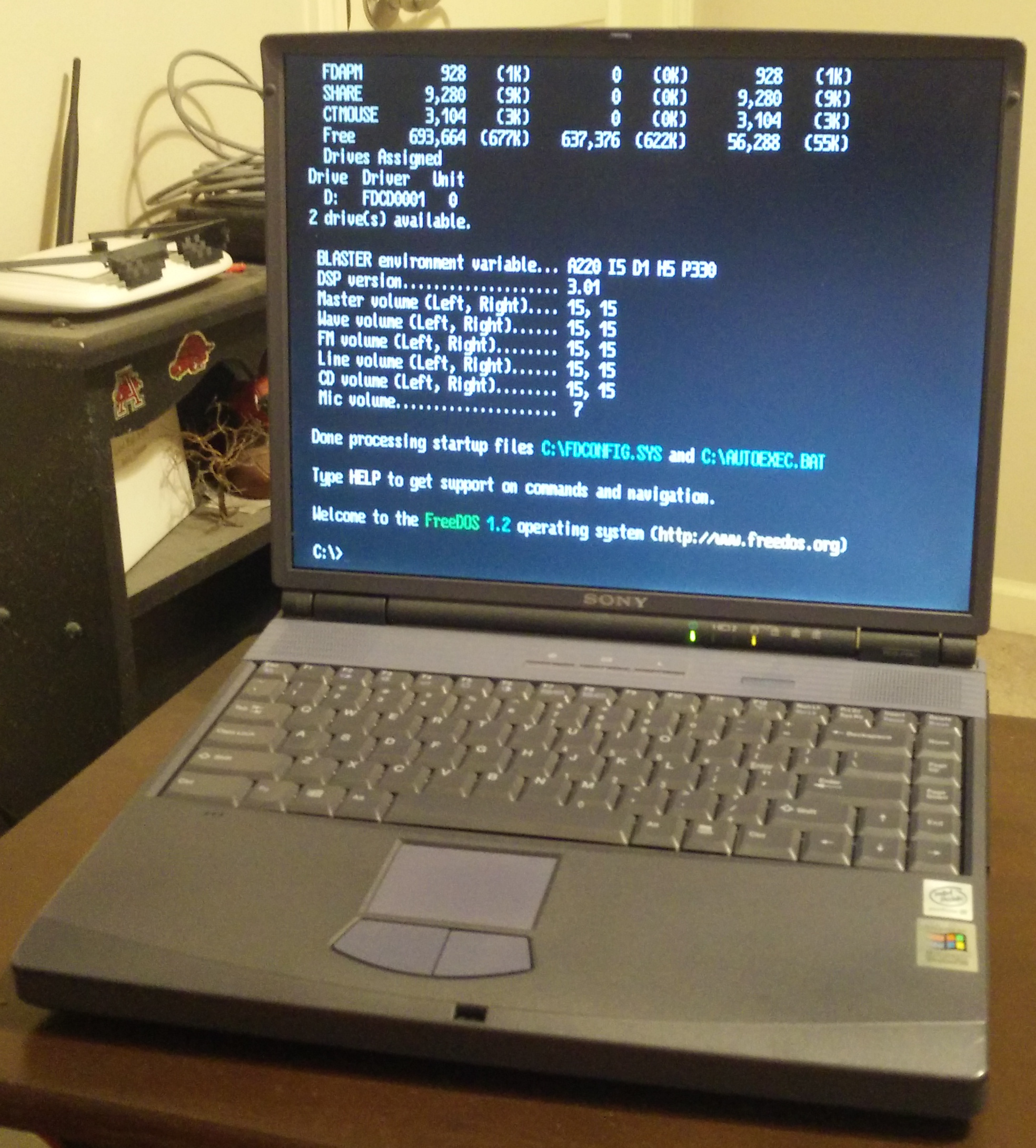 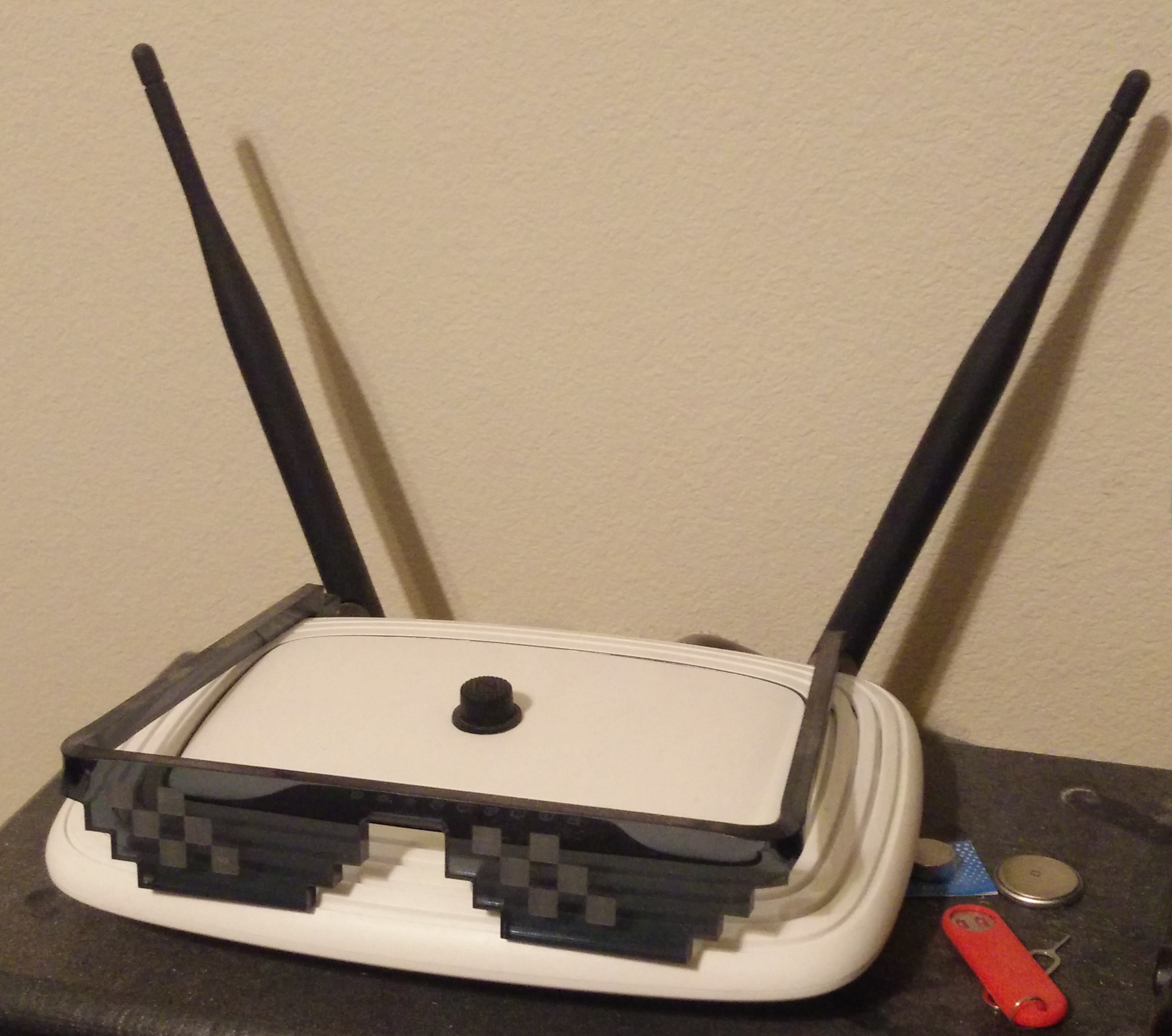 While it is quite stylish, its only interfaces to the outside world are Ethernet ports and WiFi. While this is just fine for common home networking, it simply won't cut it for my poor DOStop. The DOStop is equipped with a built-in telephone modem, but since I lack a landline phone connection, this is fairly useless to me. I looked to the FreeDOS user mailing list for assistance getting this thing online. They mentioned some protocols that I kept note of but took a while getting around to researching. Among these were Serial Line Internet Protocol (SLIP). Now, the DOStop does have a serial port on the rear, so theoretically I could use it. Enter INCO: 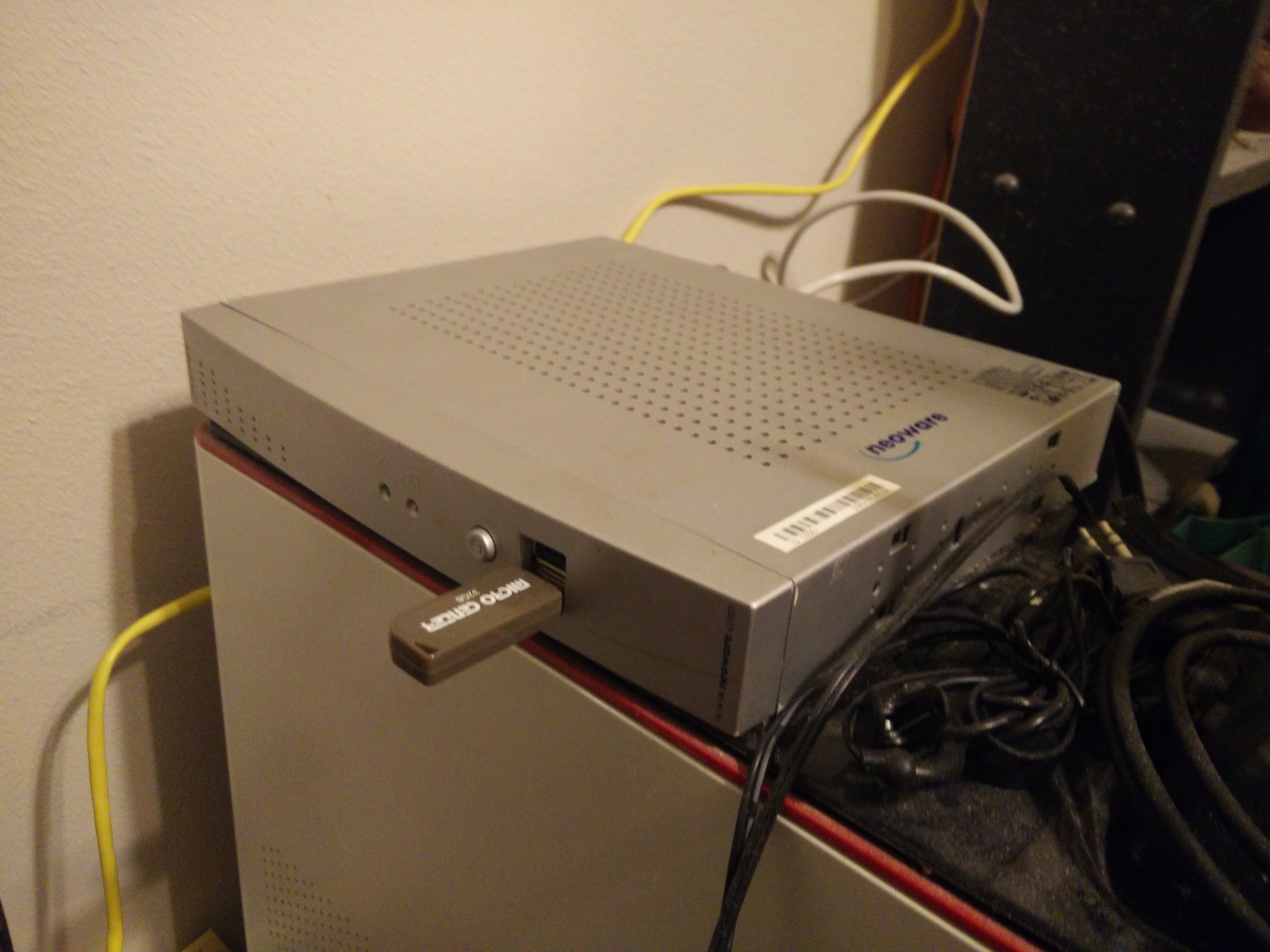 INCO is a mid-2000s Neoware thin client that was given to me by a friend collecting old hardware being thrown out by a local business. It's only got 120MB of internal storage, and I originally installed TinyCore Linux on it since it's basically the only distro that will fit. However, by adding some extra storage via USB, I was able to install Debian GNU/Linux on it, which was crucial since TinyCore omits SLIP drivers in its kernel distribution. I could theoretically have installed a custom kernel (and I even got as far as having it compiled), but the TinyCore documentation just isn't clear enough for a kernel novice like myself to be able to install it.

Now with INCO being a thin client, it has an Ethernet controller of its own for the purposes of network booting. This means I could use it as a bridge if I could establish a SLIP connection between it and the DOStop. Observe:

Now all I needed was software. Initially, I had thought I would need to implement most of the software myself. I knew that on the DOS side I needed a packet driver which uses SLIP and on the Linux side I needed a way of accepting those transmissions and translating them over the Ethernet lines. As it turns out, all the software already existed! Crynwr Software has published a SLIP packet driver since 1993, and Linux has SLIP support built in (as long as your distro includes it).

I downloaded mTCP for DOS which included a how-to guide on setting up SLIP connectivity. This along with the other documentation I had gathered up proved immensely helpful, and I was able to go from zero to Internet in a single day. Here's how it's done:

The computers should be connected via a null modem serial cable. Mine happens to be a straight-through cable attached to a null modem adapter. It's important to understand that this setup will only involve 3 wires (and one of them is just a common ground). We'll eventually need to set up our software configuration appropriately for this setup.

While many DOS TCP stacks support DHCP, it's simply easier to go with a static IP if at all possible, and that's what the mTCP guide covered, and it's what I'll cover here since it's what I've done. The mTCP guide uses the following method for determining IP addresses for this setup:

My router is configured never to assign an automatic DHCP lease with an address less than 100. I statically set INCO (the Linux host) to receive address 4 when it requests its DHCP address (it's reserved for this setup, so I can claim it). I'll use 5 for one side of the bridge and 6 for the other.

All of these commands are run as root (hence the leading #). A prerequisite is the net-tools package available on most distros. Also, you need to make sure your kernel supports SLIP. There is a SLIP driver built into Linux, but many distros do not include it in their kernel builds since it has fallen out of popularity in favor of PPP. You can run the command modprobe slip to see if the module can be loaded.

First, we need to prepare the virtual terminal for our purposes:

where $TTY is the virtual terminal (in my case /dev/ttyS0) and $BAUD is the baud rate (in my case 115200). This disables sending modem control signals and attempting RTS/CTS handshaking over the serial line. This is because of the limited number of wires available in our simple null modem setup.

Next, we attach our serial line to a network interface:

Options -d and -v are only there so that we can see clearly whether it worked. -L says to use 3-wire mode, -m says to not initialize the line into 8 bits raw mode, -p slip says to use normal SLIP (as opposed to compressed header SLIP or CSLIP which is the default), and -s "$BAUD" sets the baud rate on the line. We add the & at the end, because this is technically a daemon that will continue running in order to maintain the link.

If all this worked, it should have created a network interface called sl0. But this is a brand new interface that needs to be set up manually.

This is actually good enough to get our DOS box communicating via IP with the Linux bridge itself, but we also want it to be able to see the rest of the LAN as well as the Internet. For this we need to reroute any ARP requests trying to reach the DOS box.

Here, $MAC is the hardware address of the Linux box's Ethernet controller. You can find it by running ifconfig and checking the ether property of your Ethernet interface.

With that, we're done with the Linux side.

I'm going to assume you have a hard drive assigned to C:. If not, I trust you are savvy enough to modify my instructions appropriately.

The DOS side is considerably simpler. First, download Crynwr and mTCP on your main PC. From Crynwr, we're looking for ETHERSL.COM which is our SLIP packet driver, and we also want all the programs from mTCP. Get these onto your DOS box via sneakernet.

where %INT% is the interrupt to be used by the driver (in my case, 0x60), %IRQ% is the IRQ used by your serial controller (in my case, 4), %IOADDR% is the I/O address of your serial port (in my case 0x3f8), and %BAUD% is the same baud rate we set up on the Linux side. With any luck, this will install successfully and tell you its new Ethernet address in the console. We don't need this address for our purposes, but if you see it then that means it's working.

Technically we're done, but we'll need to configure mTCP in order to use those applications we just downloaded. First set two environment variables:

This tells mTCP that we're using SLIP (which is important) and where it can find its config file (which we're about to create). Open C:\MTCP.CFG with your favorite text editor. The first lines we need to enter are about our basic setup. Be sure to adjust your own configs if you chose something different from my setup.

Be sure to come up with your own cool hostname; just don't use punctuation. Note the NETMASK which is important and based on our numbering scheme. NAMESERVER here refers to my router's IP address since it also serves DNS. Change yours appropriately.

You can add more lines to this config as instructed in the various text manuals for the different mTCP applications.

Finally we're done! Try pinging some other hosts on your network and some Internet servers, even with domain names! 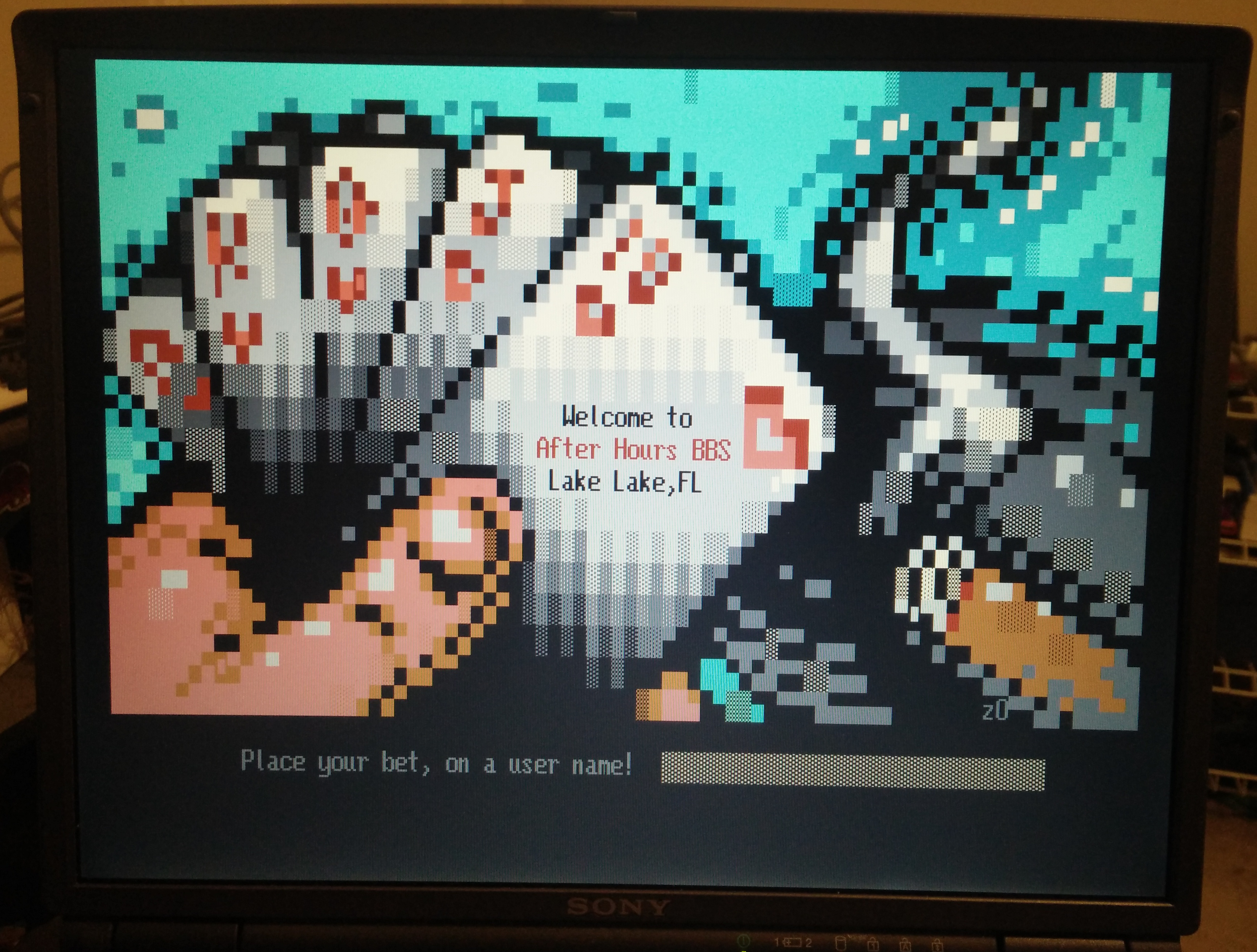 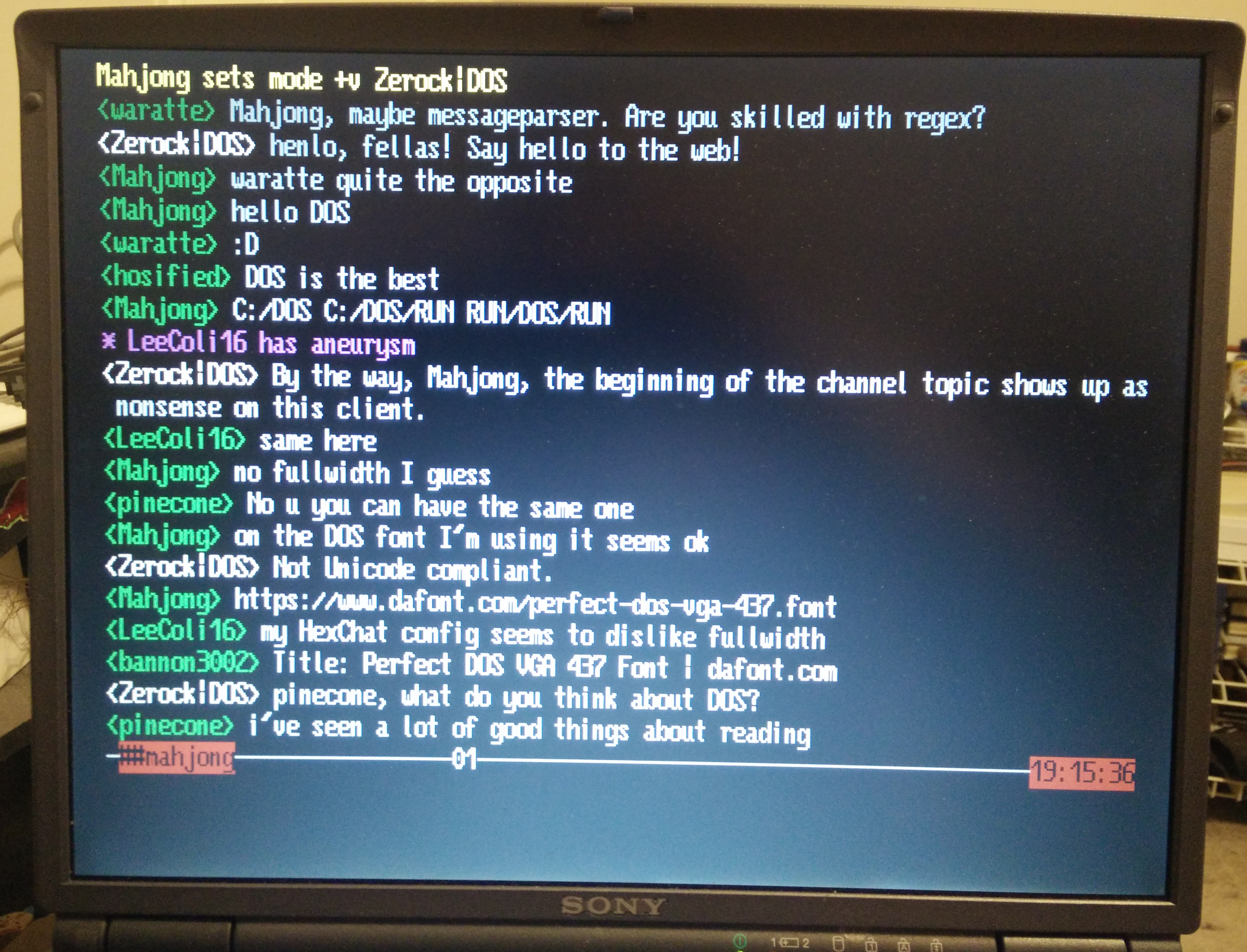 You may notice that mTCP is rather simple, and a lot of DOS network applications use WatTCP instead. You'll need to translate your configuration over. You can write a simple configuration as follows in C:\WATTCP.CFG (again, translate to your particular setup):

Finally, set the environment variable so that WatTCP applications know where to look:

Also very important is easy repeatability of this setup. I have created 4 scripts that can be run to easily recreate this setup. On the Linux side, I added some handy beeps to indicate progress or failure if you are starting this headless (say, on boot). This requires the beep package be installed.

Be sure to also put entries in your AUTOEXEC.BAT file to set the environment variables used for the config files.

Eventually I also plan to do this with the PLIP protocol, which is essentially the same thing but over the parallel port. That way I can free up my serial port for things that can only be done over serial (like XMODEM transfers).